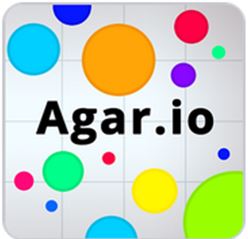 Agar.io is an online multiplayer game.

This review of Agar.io was completed by the Australian Council on Children and the Media (ACCM) on 3 August 2015.

This review of Agar.io contains the following information:

This app was reviewed for approximately 1 hour of gameplay.

Agar.io is an online multiplayer game where the goal is to be better than other players. The objective of the game is to absorb cells which are smaller, in order to grow and become the biggest cell on the playing field. The skills required include motor skills to use the app, as well as problem solving and lateral thinking.

Gameplay itself is based around the concept of trying to grow your own cell by eating smaller cells. Players begin as a medium-sized circle shape of a specific colour. They can then use their finger to navigate around a random sea of other circle shapes (some of which are smaller circles, and others that are considerably larger). If a play eats a smaller shape, their circle grows larger. However, if players hit a bigger shape, they are eaten and lose the game. The objective is to survive long enough, and eat enough smaller cells, in order to become the biggest cell in the game. As stated above, players also have the option to split their cell, or to eject some mass and grow smaller, in order to squeeze through tight areas without hitting a larger cell.

Players play online against others, and there is a leader board of scores which can be accessed in the top right-hand corner during gameplay. Players can choose whatever name they desire. Although none were witnessed during the play through for this review, it is possible that coarse language may be present within other player’s names.

In addition, while it states that this app contains in-app purchases, there were no options within the app itself to make purchases at this stage. This may change as the developers continue working on the app. The app’s gameplay did not appear to pose any overt risk to children, despite considerable advertising content.

Although it states that this app contains in-app purchases, there were no options within the app itself to make purchases at this stage. This may change as the developers continue working on the app.

As this game is an MMO-style game, individuals play against others in an online setting. They are able to absorb other players’ cells if they are 10% bigger when they run over them.