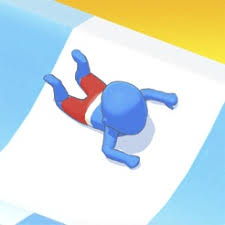 A fun waterslide race requiring fine motor dexterity and game play strategy to avoid obstacles and knock out and beat the other competitors. Not suitable for children under 13 due to excessive advertising and in-app purchasing.

This review of aquapark.io was completed by the Australian Council on Children and the Media (ACCM) on 17 October 2019.

This review of aquapark.io contains the following information:

Fast and fun, aquapark.io is a simple and entertaining game requiring the player to create and name an avatar, then direct their ride down various waterslides and try to beat all the other competitors and win the race. Using a finger on the screen to direct the avatar the player must develop strategies about how to avoid the barricades, catch the speed arrows or jump ahead on the slide at the risk of falling off. The player can also bump other sliders into barricades or off the slide. As a side achievement a tally is made of all the eliminated sliders.

The player earns coins based on the position they finish the race in, and these can earn them a chance to upgrade and change their avatar’s skin. In the developer’s description it was suggested that new levels could also be bought but the reviewer saw no evidence of this.

Requiring some fine motor dexterity, the player needs to modify their finger placement on the screen to direct the avatar forward slowly or fast, sideways and to jump or bump. Strategy is exercised when deciding to aim for speed arrows or bump other sliders into barricades and choosing to jump or knock out other competitors.

In the free version there are many avenues for the designer to present ads and a few avenues for in-app purchases. The bought game still has access to ads if a ‘revive for a video’ option is selected.

The app uses simple, colourful artwork with appealing cartoon avatars. Each is named with a national affiliation creating a more personal feel to the ‘kill’ and win aspect of the game. Scoring the avatar’s accumulated losses as ‘kills’ is a bit gruesome.

Also, in the bought version there is still access to video ad’s via the ‘revive for a video’ option.

On the menu there is a ‘No Ad’s’ icon that leads to a page where the app can be purchased for $4.49. If ‘purchase’ is selected the player is required to provide their Apple ID as with other online purchases.

The app appears to still be under construction which may explain why the developer lists on their site that further coins can be purchased (see In-app purchases), however, the reviewer could not find any link to pages offering the sale of the virtue coins.

If the option to buy virtual coins does eventually get installed these coins could be spent almost immediately depending on the level the player was on.

If the Internet is disabled the player can play the game ad-free and without accidental connectivity concerns. Therefore, 9-12 year olds may find this game entertaining with parental guidance.

There is advertising in this free version of the game, including:

The game play is short (eg 30 seconds) and the ads match this time fairly equally so there is a lot of ad watching involved. The reviewer found, however, that if the device on which the game was played was disconnected from the Internet the game continued ad free.

As mentioned, in the bought version the player can still end up watching ads if they select the ‘Revive for a video’ button, however, the banners, between ads and inset window are removed.

Phone crashed a lot during the ads.