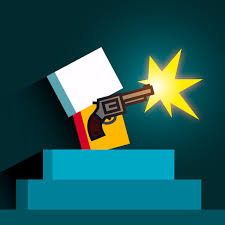 This app is a platform shoot-em game. Players will need good timing estimation and spatial awareness. Not suitable for children 12 and under, parental guidance 13 – 15 due to violent themes, social media connectivity, advertising and easy subscription access.

This review of Mr. Gun was completed by the Australian Council on Children and the Media (ACCM) on 23 April 2019.

This review of Mr. Gun contains the following information:

Our reviewer played to level 20.

In Mr Gun, players control an 80’s style, block-head character wielding a series of different guns. The character is placed in what appears to be a stairwell and remains stationary whilst the aim of the gun oscillates up and down at a 45° angle. Enemies then appear on the stair case just above your main character. Players must time the gun angle correctly and tap anywhere on-screen to shoot the enemy. If an enemy is hit, you go up one flight of stairs to the next enemy…and so on, until you reach the main boss of that level. As players progress through levels, bosses become harder to defeat with more bullet hits required to take them out. If you miss any target once, they then kill you with a single shot and you must re-start the level. Coins are collected through successful kills and can be used for upgrades (e.g., guns and skins, etc.). The aim of the game is to make a series of perfect shots in order to kill the boss and progress to the next level.

Guns are the main feature of this game and getting “headshots” is rewarded with more coins. Although it’s not graphic in nature (you don’t see blood, blood splatter or body deformation) it goes without saying that the principle of earning rewards to shoot people in the head may raise a bit of concern for some parents – even if it’s just a game. The app also easily connects with Facebook and Instagram and within one touch of the “Elite Access” button; parents could discover that although the first 3 days are free, that their child has signed them up for a weekly subscription of $8.49.

There is no In-App purchasing in this game, however it is easy for children to sign up to a weekly subscription of $8.49.

There is some online connectivity in this game, for example:

The developer does warn that there is “mild simulated gambling”. However, the current reviewer did not encounter this within 20 levels of gameplay – perhaps updates have removed certain features or simulated gambling does not occur until later levels.

There is some advertising in this app, for example: