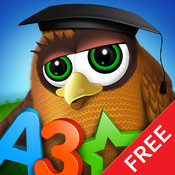 This review of Preschool and Kindergarten learning Kids Games Free for Toddlers and Preschool Children all in one Montessori based Brain Kid Puzzles was completed by the Australian Council on Children and the Media (ACCM) on 2 September 2014.

This review of Preschool and Kindergarten learning Kids Games Free for Toddlers and Preschool Children all in one Montessori based Brain Kid Puzzles contains the following information:

This app teaches children how to trace number and letters through a fun and encouraging, reward system based game.

The free version of this app consists of three mini games to help kids learn their letters and numbers. The first is a number tracing game. A recorded voice explains “this is the number one” and then the player must follow the fireflies to trace that number. Every time the child traces the number correctly they gain points. The free version of the app has the numbers 1, 2 and 3, however you can pay for the rest of the numbers (see In App Purchases). The child is given positive encouragement such as “you rock” when they trace correctly and given reinforcement such as “let’s try again” when they make a mistake.

The second game is a letter tracing game. A recorded voice says “the word apple begins with the letter A, to trace the letter A connect the dot and the star with a line”. The player first traces the letter following the dots and then they must write the letter themselves. They are rewarded with stars when they write the letter correctly. The free version of the app has the letters A,B and C, you can pay more to get the rest of the alphabet.

The third game is an alphabet game. The uppercase and lower case letter A appears on screen surrounded by grey shapes. When the player clicks on the letter a voice will explain how to pronounce it. When the child clicks on the surrounding shapes they come into colour and the voice might say “alligator” or “anchor” and then show you how to spell those words. Once again the free version only includes the letters A, B and C.

This game is an excellent way to help young children learn to write their letters and numbers. It would be most beneficial to use a stylist with this game instead of your finger because children should get used to writing with gripping a pencil. There is a parent mode (see Online Information) which allows the recorded voice to be changed to either male or female. However, it always has an American accent which might be problematic when the voice is teaching the player how to pronounce the letters and numbers.

In the app it asks you if you want to purchase the paid extended version of the app for $12.99. There are also options to buy extended parts of the app. For example, the full alphabet tracing game costs $3.79.

The app only shows online information when in ‘parent mode’. To enable parent mode, the player must hold down a button for three seconds. Once in this mode you can like the app on Facebook and change the settings.