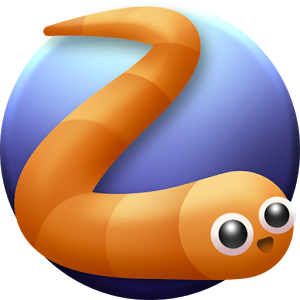 Slither.io is an online multiplayer game.

This privacy check of Slither.io was received from AppCensus on 13 September 2021.

This review of Slither.io was completed by the Australian Council on Children and the Media (ACCM) on 31 May 2016.

This review of Slither.io contains the following information:

This game does not contain levels.

In slither.io the user plays against other people online. The aim of the game is to create the longest snake by eating light bubbles and not getting bumped into by other snakes.

The player begins by choosing a nickname and the colour of the snake that they want to play as (see Online Information for more details about nicknames and sharing scores online). The player starts as a small snake and must slither around trying to eat glowing light bubbles to grow bigger. The more light bubbles you eat, the more points you get and the bigger your snake becomes. The player can slither their snake by swiping their finger around the screen. The player is playing against all other people who are currently online at that point in time. As you slither around, you will begin to see other peoples' snakes (both large and small). The aim of the game is to avoid bumping into another person’s snake. If you bump into them, your snake explodes and the game is over (see Violence and Scary Material for more details).  However, if you can make them bump into you, they will explode and your snake can eat their light bubbles and grow larger. This is a simple game that, while suitable for young children, should be monitored by parents as the other online players' nicknames are not controlled and may be inappropriate (see Sexual References and Coarse Language for more details).

The only in app purchasing option is to remove the ads from the game - this costs $3.99.

When the player begins the game they must choose a nickname. The nicknames and scores of the top 10 players playing online at that moment are shown on the game screen to all players. The player also has the option of sharing their score via social media. Additionally, this game can only be played when an internet connection is available.

There are no sexual references or gender stereotypes in the game itself. Players can however, see each others' nicknames which may be inappropriate for children to see.

There was no game playing behaviour which may be of concern to parents found during this review.

Violence and Scary Material: When you bump into another player’s snake, your snake ‘explodes’ into small, glowing dots for the other snakes to ‘eat’ to gain more points. This explosion is not graphic or scary.