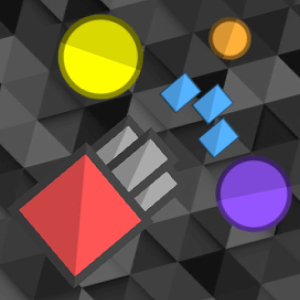 This review of Tank.io was completed by the Australian Council on Children and the Media (ACCM) on 16 June 2016.

This review of Tank.io contains the following information:

This app was reviewed to level 57.

Tank.io is a top-down two dimensional arena based, geometric tank battle game. The objective is to level up and defeat other tanks. The skills required are motor skills, strategy and critical thinking.

When the app is first opened, a pop-up appears asking players if this app can send them notifications. The game then opens a screen with three options: Rate, which allows the player to rate the app on the respective app stor; a camera button, which allows players to take a screenshot and save it to the device and a play button.

When the play button is pressed, the player is transported into a top down 2 dimensional geometric battle arena. There are many different shapes which the player can destroy and gain experience. There are also other vehicles around, piloted by the game, which can attack and be attacked by the player. There is no violence shown. The enemies become more challenging as the player’s level increases.

As the player progresses, they are given skill points which they can add to a variety of attributes such as speed, strength and defence. These improve the player’s chance of survival.

The game continues until the player is defeated, at which point, a full screen advertisement for an app is displayed. This must be manually closed.

As the player increases in level, different projectiles are unlocked. Players can choose a wide variety of projectiles and these impact the player’s ability to react offensively and defensively to others.

Some of the full screen advertisements displayed are for violent and wartime simulation apps.

No: No in app purchasing was found during this review.

There are full-screen ads displayed within this app that must be manually closed.

Some of the full screen advertisements displayed are for violent and wartime simulation apps.

This is a tank battle game.