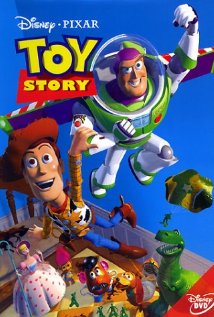 Parental guidance under 5, and for some 5-8s (scary scenes)

Andy (voice of John Morris) has a lot of toys which pretend to be inanimate when humans are around but come to life when on their own. Andy’s favourite is his cowboy Woody (Tom Hanks).

When a space ranger toy, Buzz Lightyear (Tim Allen), arrives with an array of the latest gadgets, all of the toys are impressed but Woody is jealous of the attention being diverted away from him.

When Woody's jealousy gets the better of him, Buzz ends up being knocked out the bedroom window. Realizing he must rescue his rival in order to stop the rest of the toys from turning on him, Woody sets off to find Buzz. The ensuing adventure includes planning a harrowing escape from Sid (Erik Von Detten) the mean kid next door’s house.

Buzz and Woody set their differences aside to help themselves, save an army of disfigured toys and attempt to return to Andy before it is too late.

It is unlikely that anything in this movie would disturb children over the age of eight.

There is also plenty of associated merchandise being marketed to children.

After enduring a tea party, with Sid’s sister and a retinue of decapitated dolls, Buzz acts as though he is drunk.

There is a fair amount of name calling throughout the film, including ‘Idiot’, ‘stupid’, ‘shut up’ and ‘backstabbing murderer’.

Mr. Potato Head indicates that one of the other toys is a ‘butt kisser’ by taking his lips off his face and using them to kiss his own behind.

Toy Story 3D has the same content as the 1995 animated film, but because it is produced in 3D, the characters come right off the screen. While fans of the original film will likely enjoy this, the 3D effects could make some sections of the movie scarier for younger viewers than the original version.

The main messages from this movie are to see the value within yourself, regardless of what others see, to know your own heart and conscience and be true to what you believe.