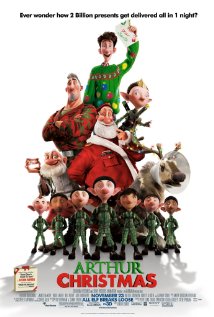 Santa Claus is preparing for another very busy Christmas with the help of his many elves and his family, Mrs Santa Claus, his Dad, Grandsanta and his two sons, Steve and Arthur. Steve is very good at giving orders as he used to be in the army.  Steve is hoping that as this is Santa’s 70th year of giving out presents, he will announce his retirement and pass the job onto Steve.

When this doesn’t happen Steve is quite annoyed but Arthur is not bothered and is happy to continue to read and reply to the letters from the children.  At the last minute it’s discovered that a child has missed out on a present. Steve tries to reassure everyone saying that one mistake isn’t bad but Arthur can’t rest until he knows that one child has received her present.

There are a couple of scenes which might scare little kids such as:

The message of the story is that while it’s nice to be important it’s more important to be nice and kind to others.