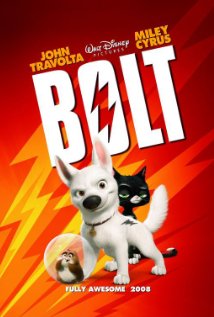 Bolt thinks he is a crime-fighting dog with super powers but he is only a dog acting on a television show. When the boss of the television show decides that an episode should end without Bolt saving his owner Penny, Bolt escapes into the real world to save her. But in the real world Bolt does not have any super powers. With the help of his new friends, a cat named Mittens and a hamster named Rhino, Bolt travels across America to find and rescue Penny.

The messages of this story are that you do not need super powers to be a hero and that friends stick together.