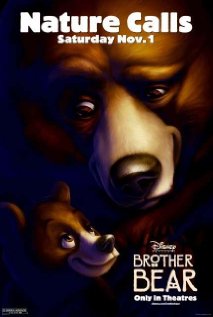 Kenai is an Inuit boy who lives with his two older brothers Sitka and Denahi. In their tribe they have a ceremony to celebrate boys growing up. At this ceremony the boys learn their animal symbol. Sitka is an eagle which means brave, Denahi is a wolf which means wise and Kenai is a bear which means love. Kenai is angry because he does not want to be a bear. One day Sitka is accidently killed by a bear and Kenai decides to hunt and kill the bear. When Kenai kills the bear, Sitka’s spirit decides to teach him a lesson and turns Kenai into a bear. Kenai must live as a bear until he learns his lesson.  As a bear Kenai makes friends with a cub named Koda and they work together to help Kenai return to his human form.

The main message of this story is that you should always try to see things from someone else’s perspective.