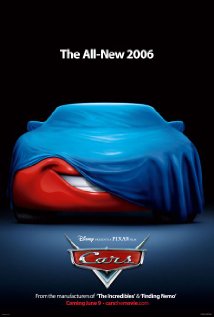 Lightening McQueen is the hottest new car on the racing track but even he’s surprised when he ties in first place with the King and Chick Kicks. He sets out to California for the tie-breaker but gets lost on the way and ends up in a desolate town called Radiator Springs.  On his way there he thinks he’s being chased by a police car and causes quite a bit of damage crashing into buildings in the town.  The Sheriff is Sally, a snazzy little Porsche, who sentences him to community service.

There he also meets Doc, a Hudson Hornet and Mater, a beat up old tow-truck. Impatient at first to get to the race, McQueen does what he has to do. He makes good friends however, with Doc, Mater and Sally and learns lots of important lessons about life which changes his views about winning and losing.

Quite a lot of action violence in this movie such as:

There’s also a scary scene which might upset little kids when Lightning McQueen and Mater are chased through a field by an enormous tractor named Frank who wants to destroy them. Frank’s crushing blades want to rip Lightning McQueen to shreds when the terrified car crashes through a fence and Frank stops in time.

Life isn’t all about winning and being a celebrity but about being a good friend and helping other people out.