Cats and Dogs 2: the revenge of Kitty Galore 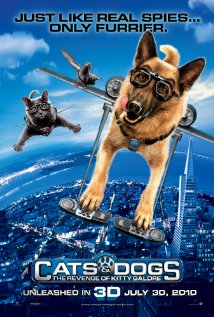 Kitty Galore is a wicked cat with an evil plan to make all dogs on Earth go mad so that cats can once again rule over humans and have them for slaves.  The top secret agent team of dogs – DOGS – have discovered her plans. Lou, the top spy dog and his second in charge Butch, seek out the help of ex-police dog Diggs to help them find and stop Kitty Galore. They also use the help of Seamus, a carrier pigeon.

Meanwhile, the cat spy agency MEOWS, is also looking for Kitty Galore. Catherine and Tab Lazenby are doing their best to catch Kitty because they know she is very dangerous. It seems the only way to catch Kitty is for dogs and cats to work together!

Quite a lot of action violence with dogs and cats yelling, threatening, hitting, biting and kicking one another and other scenes such as:

The message of the story is that even your enemies can become your friends if you try to get on.