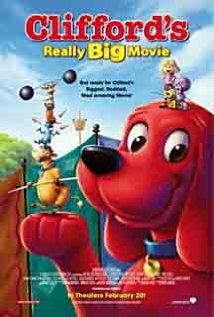 Clifford is a loveable, huge red dog who lives with Emily Elizabeth and her family on Birdwell Island. Clifford’s best dog friends are T-Bone and Cleo. One day Clifford hears Emily’s parents talking to a neighbour about how much it costs to feed him. This upsets Clifford and he decides to go and join a circus to help pay for his food.

Clifford takes T-Bone and Cleo with him and they join an animal act. There they meet Shackelford, a ferret that performs on a trapeze and Dorothy the cow who performs a tight-rope walking act. Their manager loves all the animals but hasn’t been able to make the act successful so he decides to enter them into a competition that could win them a lifetime’s supply of Tummy Yummies.

Some comic violence mainly done for laughs such as:

There are also a few scenes that might be a bit scary such as:

It’s better to talk to someone if you hear something that upsets you in case you might have got the wrong idea.