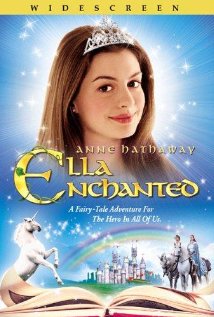 Ella is a young girl growing up in the enchanted land of Frell. As a baby she was given an unfortunate gift, by her well-meaning fairy godmother, of obedience. This means Ella has to do everything she’s told even when it means biting another girl’s fingers. When Ella’s mother dies her father remarries to Olga who has two daughters, sneaky Hattie and stupid Olive.

Ella doesn’t like the way the King has made all of the giants, elves and ogres live apart from the rest of the people and work on his land as slaves. She decides she must go and find her godmother to undo the spell and be able to oppose the King. On the way she makes friends with Slannen, an elf who had been tied to a wheel by bad ogres. Ella unties him and is then attacked by the ogres. She is about to be put into a cauldron of boiling water when she is rescued by Prince Charmont (Char for short).

There are also some scenes that could frighten very young kids such as:

The message of the story is that you have to be really strong to get over problems that come against you.