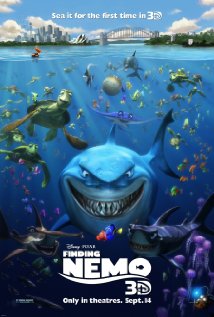 Marlin and Coral are Clownfish who live on the Great Barrier Reef and are soon to be new parents. They are eagerly awaiting the birth of their many babies when a vicious barracuda appears, killing Coral and all of the babies except one. Marlin’s left to raise his son Nemo alone and because he lost all his family he’s afraid of everything and very protective of his son. Nemo’s not allowed to do anything on his own and one day rebels against his father and ventures out into the unknown ocean. He’s caught by divers and taken to live in a dentist’s surgery aquarium in Sydney Harbour.

Marlin sets out to find his son and teams up with Dory who can speak many fish languages and is a real help to Marlin. Together they face many dangers and make many friends on their journey.

There are some scary scenes in this movie such as: