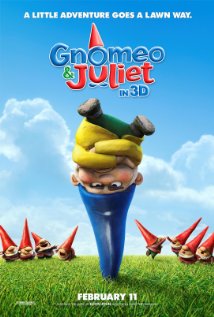 Gnomeo and Juliet meet by accident and don’t know that they’re from the opposite tribes. They fall in love and when they realise that their love is going to cause a lot of problems for them they decide to continue anyway. This turns out to be quite a disaster for both of their families.

Quite a lot of fighting in this movie, mostly done for laughs, between the red and blue gnomes using garden spades, bows and arrows and catapults and other scenes such as:

There are also scenes which could scare younger kids such as:

The message of the story is that love can overcome all difficulties.