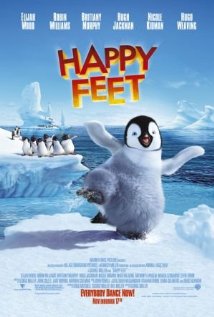 Mumble is a young emperor penguin and the only child of Norma Jean and Memphis. Unlike his famous parents, Mumble can’t sing despite trying his hardest. His parents plead with him to try and sing and they get him teachers and voice instructors but none can help. Mumble has no song in him. What Mumble can do though is dance, but he’s afraid to let anyone know this because he feels like an outcast.

By chance, Mumble comes across a group of hip Latino penguins, led by Ramon. Mumble learns that his dancing skills are really very good and something to be proud of. Mumble though still feels like he has to prove something to his community so he goes off in search of the reason why fish are becoming scarce. This takes Mumble further away than any of his kind have gone before and he discovers that he has many talents and abilities that will help his penguin colony to survive.

There are several scenes where animals are in danger which might scare younger kids such as:

The message of the story is that everyone has their own gifts and talents which are different from others. We should respect each other’s gifts and abilities.