Horton Hears a Who 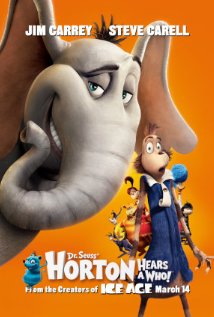 One day, Horton the elephant hears a noise coming from a speck of dust. Because Horton has big ears, he can hear sounds that other animals can’t. Horton learns that living on the speck of dust are very tiny people called Whos in a town named Whoville. Horton promises the Mayor of Whoville that he will find a safe place to put them. But the mayor of the jungle where Horton lives, who is a Kangaroo, sees Horton talking to some dust and decides that Horton should leave the community and the dust should be destroyed. Horton tries to protect the dust from the Kangaroo but only a special Who in Whoville can save their town.

The messages of this story are that “a person’s a person, no matter how small” and just because you can’t see, touch or hear something doesn’t mean that it doesn’t exist.