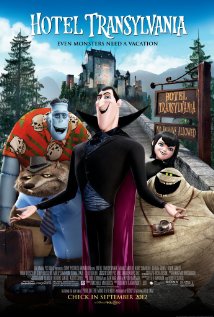 Count Dracula or Drac, as he prefers to be called, has built a nice retreat from the human world, which is the Hotel Transylvania. This hotel welcomes all ghosts, ghouls, monsters, vampires, etc. but not human beings as Drac thinks that humans want to dominate the world and extinguish all other life forms. Drac decides to throw a party for his daughter Mavis’s 118th birthday and invites all the famous monsters such as Frankenstein, the Mummy, the Invisible Man and others.  What he doesn’t expect is a human called Jonathon turning up.

Drac decides to let Jonathon stay as he’s not like other human beings he knows and disguises him as a monster for the party. He’s not ready however, for Jonathan to take a liking to Mavis.

Quite a lot of scary scenes in this movie such as:

There’s also some violence in this movie such as:

We shouldn’t judge other people by their appearances or if they look different to other people.  We should get to know someone first.