How to train your dragon 2 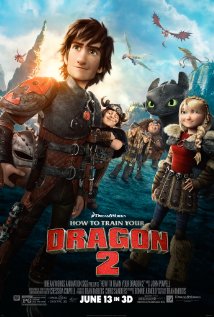 The story starts 5 years after the end of the first How to train your dragon film. One day while Hiccup and Astrid are out flying on their dragons and exploring new lands they find a ruined fortress covered in ice. The owner of the  fortress, a dragon-trapper named Eret thinks that Hiccup has destroyed his fortress and captures Hiccup, Astrid and their dragons.

While they are prisoners, Hiccup and Astrid learn that a mad warlord named Drago has captured an army of dragons which he will use to conquer the people and dragons of Berk. The rest of the film tells us about their adventures as they try to stop the evil Drago.

There are many scary scenes and characters.

Good people and animals (like the dragons captured by Drago) can sometimes do bad things when bad people force them to.