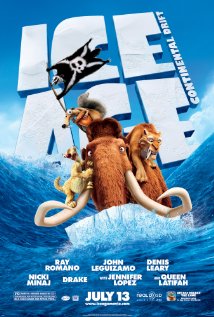 Manny and Ellie’s daughter Peaches is now a teenager and wanting to break the rules and go off to be with Ethan, the heartthrob mammoth.  Sid also has his problems as his old granny has come to live with him. Scrat, though, causes the most trouble, when in his never-ending hunt for acorns he accidentally cracks the earth’s core splitting the single continent into several pieces.

Manny, Sid and Diego find themselves on an ice-berg drifting out to sea and separated from Ellie and Peaches. The friends desperately try to get back to their family but are attacked by a band of pirates, led by Captain Gutt, a baboon and mythical ‘sirens’ who only want to cause them harm.

Quite a lot of fighting and battles between Manny, his friends and the Pirate crew as well as comic violence in this movie such as:

There are also some scary scenes, particularly in 3D, which might frighten younger kids such as:

The message of the story is that your family, which isn’t always the one you are born with, are those who protect and love you.