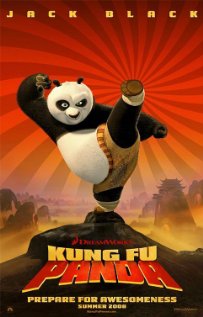 Po is a rather large panda who’s always dreamed of being a Kung-Fu champion. He knows this is unlikely to happen as he works in his father’s (a goose!) noodle shop. When he hears that that a new dragon warrior is going to be chosen, Po goes along to the Jade Palace to watch the event. He gets there late and finds the gates closed so he straps some firecrackers to his leg and flies over the gate, landing badly.

When he awakes he’s most surprised to find that the wise turtle has chosen him to be the dragon warrior. He’s not as surprised though as Kung-Fu Master Shifu and his ‘Furious Five’ disciples. The decision also angers Tai Lung, a snow leopard and also a Kung-Fu master but an evil one who’s been kept in prison. Tai Lung escapes and sets out to get revenge on Po and Shifu.

Quite a lot of martial arts action in this movie including kicking, slapping, punching and tossing through ceilings and over walls and other scenes such as:

There are also some scenes that might scare younger kids such as:

The message of the story is to believe in yourself and to follow your dreams.