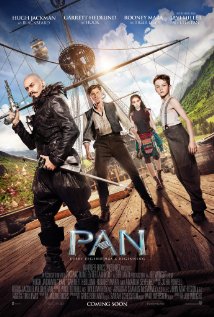 Peter Pan grew up as an orphan in London and was kidnapped along with a lot of other orphans by a pirate called Blackbeard and his mates. Blackbeard takes the orphans to Neverland and keeps them captive there. Peter Pan becomes friends with one of the pirates called Hook and together they manage to escape from Blackbeard. Hook and Peter Pan find other people who live in  Neverland and one of them, a warrior called Tiger Lily, tells Peter Pan that they have been waiting for a boy who can fly to help them defeat Blackbeard. Peter has to believe that he is that boy.

There is quite a lot of fighting in this movie such as:

Some young kids will be scared by the above-mentioned violence and also by other scenes such as:

The message of the story is to believe in yourself and to stand up for what you believe in.