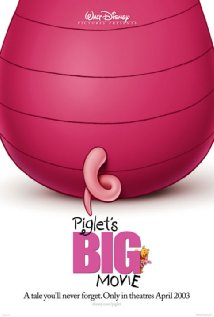 Piglet is so small that often his friends leave him out of their plans which make Piglet very sad. One day Piglet hears Pooh Bear, Tigger, Eeyore and Rabbit planning to lure bees out of their hive and into another so Pooh can get the honey. Piglet is upset that he hasn’t been asked to help and wanders off alone. He decides that even though he’s small he can still help in the “biggest and helpfullest way” so goes back to find his friends.

When he gets back he finds his friends have fled having been chased by angry bees. The friends than realise that Piglet is missing so are determined to go and find him. They use one of Piglet’s albums of memories to help find him and as they go on their journey they realise that Piglet is actually the one who always gets them out of trouble. The friends have to go through some stormy weather but they are determined not to give up in their search for Piglet.

There are a few scenes that might be a little scary such as:

Being small makes doesn’t stop you being useful, helpful and, kind.