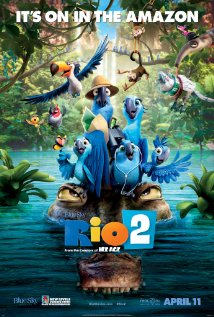 In this sequel to Rio, the blue macaws Blu and Jewel have 3 children who are all enjoying growing up in Rio. Jewel is very excited to hear that more blue macaws have been found in the Amazon jungle and Blu agrees to take his family there on holiday. While in the jungle, the family has lots of adventures and meets some scary characters, including loggers who are destroying the forest.

The main message from this movie is that the forest should be saved for the animals and plants that live there. Also not to be unfair to others just because they are a bit different.