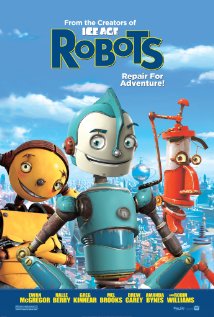 Rodney Copperbottom is a young robot who wants to be an inventor when he grows up. His favourite TV show is about inventions hosted by a Mr Bigweld whose door is never closed to new ideas. When Rodney’s old enough he travels to Robot city to show Bigweld his latest invention – a clever little robot that does simple tasks very fast.

When Rodney arrives in Robot City he’s very upset to find that Bigweld’s company has been taken over by Ratchet, a wicked man who only cares about making money. Ratchet lives in fear of his even more wicked Mother who wants to destroy all the robots’ spare parts and upgrade their bodies. Any robots left wandering the streets at night are taken to the Chop Shop where they are melted down for scrap metal. Rodney has to do something to help the robots and starts repairing them himself. This does not please Ratchet.

There are also several scenes which could frighten younger kids such as:

The message of the story is to follow your dreams and not to be put off by people who don’t want you to succeed.