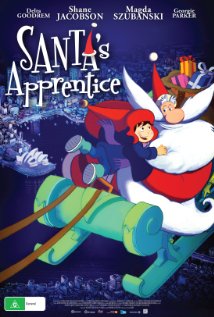 Santa is getting very old and is starting to forget things. He knows it’s time to start looking for a boy to train up to be the new Santa but doesn’t really want to stop being Santa just yet. A council of Santas agrees that they must find a young boy but he has to be able to meet three conditions: he has to be named Nicholas; he has to be an orphan and he must have a pure heart. It isn’t easy to find someone who meets of all these conditions but they eventually find a boy in an orphanage in Sydney, Australia.

The young Nicholas is very worried that he’ll never be good enough to be the new Santa, especially when he’s afraid of heights. He doesn’t see how he’ll ever be able to climb up and down chimneys. Santa takes pity on the young boy and realises it’s up to him to train him and help him not to be afraid. This Nicholas is going to be the best Santa ever.

There’s a mean bully at the orphanage, also called Nicholas, who often tries to hurt other children such as:

There are also a few scenes that might scare younger kids such as:

The message of the story is to keep trying and  not to be afraid.