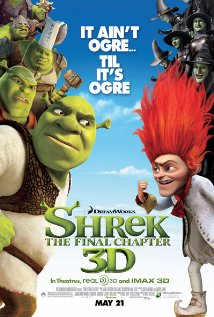 Shrek is finding life boring with his three ogre babies about to turn one. He’s tired of changing nappies and playing baby games and starts to long for the days when he was a fearsome ogre. At the babies’ party, Shrek drinks too much and talks too much to the wicked Rumplestiltskin who offers him a whole day when he can be his old ogre self. In exchange Shrek has to give up just one day from his childhood.

As luck would have it Shrek chooses the day that he was born which means that Far Far Away is now a very different place. Rumplestiltskin is the evil ruler, Fiona is the leader of an ogre rebellion, Puss-in-Boots is a fat cat and Donkey is a slave to witches. The only way to break the spell is for Fiona and Shrek to share a true love’s kiss before the day ends.

Quite a lot of comic violence as well as other fighting in this movie such as:

There are also scenes in this movie that would frighten younger kids particularly seeing the loveable Shrek turning back into a fierce ogre and other scenes such as:

The message of the story is to be thankful for what you have and to appreciate your family and friends.