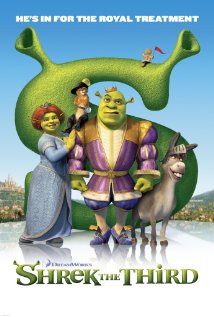 When Princess Fiona’s father, the Frog King, dies, Shrek finds out that he and Fiona are going to be the next King and Queen of Far Far Away. Shrek is not pleased about this at all as he’d rather stay in the swamp with Fiona and raise their children there. He sets out with Donkey and Puss-in-Boots to see if he can find anyone else who might be an heir to the throne.

They find Arthur Pendragon who is a suitable heir, but like Shrek, doesn't really want to become king. In the meantime, the evil Prince Charming sees his opportunity to grab the throne for himself and so with his villain friends, they attack the castle. They imprison Fiona and her charming princess friends but it is the most unlikely hero who saves the day.

Quite a lot of comic violence in this movie such as:

There are also some scary scenes and tense moments when Shrek’s life is in danger and at one point it appears that he might be dead. The baddies in the movie are quite fierce, which might scare younger kids.

The message of the story is to believe in yourself and not be upset by how other people see you.