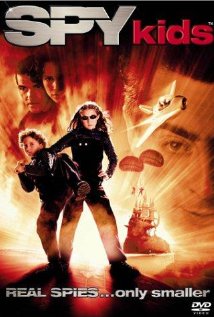 Families usually have secrets, but Gregorio and Ingrid have kept a huge one from their children, Carmen and Juni – they used to be international spies!  It’s only when they are kidnapped that the kids find out their parents are not as boring as they thought!

Carmen and Juni must stop their fighting and work together to save their parents from the evil Floop and his ‘Thumb Thumbs’ who have kidnapped them. Floop plans to take over the world with an army of robot spy children who can’t be destroyed by humans. It’s up to Carmen and Juni to save the world from this evil.

Quite a bit of action violence, fighting, chases and explosions in this movie such as:

There are also several scary scenes which might frighten younger kids such as:

The message of the story is the importance of family and working together.