Star Wars Episode 11: the attack of the clones 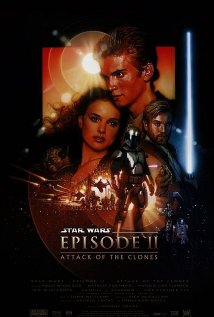 Ten years later, Padme Amidala is now a senator for the planet Naboo. Someone attempts to kill her but fails and so to keep her safe, Chancellor Palpatine requests that Jedi knight Obi-Wan Kenobe and his apprentice, Anakin Skywalker come to protect her. When a second attempt is made, Jedi Masters Yoda and Mace Windu assign Obi-Wan Kenobe to find the would be killer.

Obi-Wan finds the killer, a bounty hunter named Jango Fett, on the planet Kamino, where he also finds a secret cloned army. Obi-Wan doesn’t manage to capture Jango however, and follows him to the planet Geonosis. There he finds Jango is working for Count Dooku, a former Jedi Master who has turned to the dark side of the force.  Meanwhile, Anakin and Padme are in trouble as they travel to the planet Tatooine when Anakin believes his Mother is in terrible danger.

There is quite a lot of fighting throughout this movie including battle scenes between robot droids, war machines and human clones. Some scenes include:

The main message of this movie is that if you hold onto hatred and anger it will bring out the worst in you.