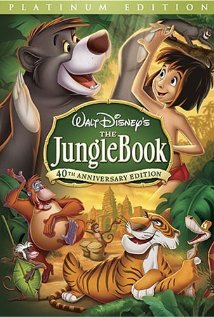 Bagheera, a panther, finds a baby boy who’s been left alone in the jungle and so he takes the ‘man-cub’ to a family of wolves to look after. The wolves name him Mowgli and raise him to the age of 10. Mowgli loves his life in the jungle and has many friends but Shere Khan, an evil tiger who hates men, has found out that he lives with the wolves and is coming to find him.

His wolf family decide it’s time for him to return to a human village and Bagheera offers to take him. On their way they meet many dangers including Kaa the python. They also make new friends such as the care free bear Bahloo and a band of monkeys led by an orang-utan named King Louie. Before they reach the village they have to face Shere Kahn and Mowgli’s life is very much in danger.

There is some fighting in this movie, some of it done for laughs, but  Mowgli and Bagheera are often in danger in scenes such as:

There are also several other scenes that would frighten younger kids such as:

The message of the story is that friends and family are the most important things of life.