Thomas and Friends: Sodor’s Legend of the Lost Treasure 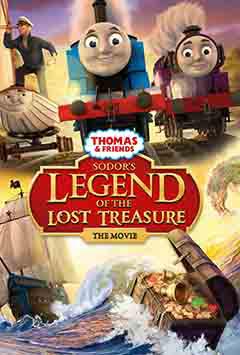 Thomas is in trouble because he took a joke too far and caused a big problem at the train station. The Fat Controller sends him away to work on an island as punishment. Thomas is travelling on a new track when it collapses and  he falls into an old mineshaft. Inside the mineshaft Thomas finds a hidden pirate ship. Thomas and his friends search the ship for lost treasure and have to fight a wicked sailor who doesn’t want anyone else to get to the treasure first.

There is one scary scene that might scare younger kids when Thomas nearly crashes into another train head on. He manages to move out just in time.

John the wicked sailor threatens to throw dynamite explosives at Thomas who is chasing after him.

The messages of the story are that sometimes you have to be very brave and take chances when you need to put something right and also the importance of good and loyal friends.