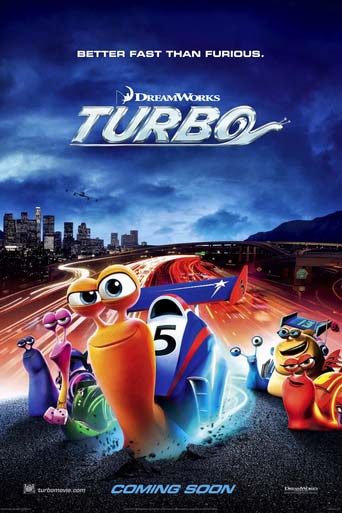 Turbo is a snail who dreams about being able to go really fast which is, of course, not easy for a snail. Turbo wants to be as fast as a racing car so he can enter the Indianapolis 500 – a very big motor car race. All of Turbo’s friends think he’s really silly and make fun of him. Then one day Turbo gets picked up accidentally by a car on the road and something amazing happens. A chemical from the car’s engine gets into Turbo’s DNA and all of a sudden Turbo can go really fast! Even more amazingly,  Turbo’s dream comes true when they let him enter the Indy 500 but can he really win against all those super-fast cars?

There are some scenes that might scare very young kids such as:

The message of the story is that ‘no dream is too big, and no dreamer is too small’.