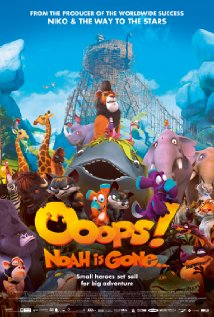 Lion, the King of the Jungle, calls a meeting of all the animals to tell them that a flood is coming and the world is going to be destroyed. He tells them that a nice man called Noah has built an ark to save the animals. Dave and his son Finny, a pair of Nestrians, who are loveable creatures, arrive at the ark and find they are not on the list. Dave is very upset by this and disguises himself and Finny as Grymps. They are let on board and put in a cabin with real Grymps, very unfriendly creatures, Hazel and her daughter Leah.

Finny and Leah go off to explore and find themselves on the wharf when the flood comes. It is a desperate race to reach the top of the mountain to escape the ever-rising flood and to hide from Griffins, a pair of birds who are trying to eat them.

There are several scary scenes in this movie that would frighten younger kids such as:

There are also some violent scenes such as:

The main messages from this movie are that every creature has a place and that together we can achieve greater things than on our own.