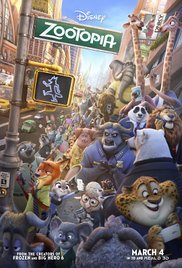 Zootopia is a place where all animals live together in peace. Judy Hopps is a rabbit who wants to become a police officer and move to Zootopia. Her friends and family try to talk her out of it but Judy wants to follow her dreams. Judy’s partner is a sly fox named Nick and together they have to find out why a lot of animals are going missing from Zootopia.

There are some violent scenes in this movie such as:

There are also some scenes, which could frighten younger kids such as:

The main messages from this movie are to follow your dreams, to not judge other people based on how they look and the importance of teamwork.