Ad Standards rules only one It: Chapter Two promo is "excessively menacing" October 17, 2019

Ad Standards rules only one It: Chapter Two promo is "excessively menacing" - despite many parents complaining of "confronting" posters and trailers

A BILLBOARD advertisement for the horror movie It: Chapter Two - featuring the title character's mouth dripping blood - has been deemed as "excessively menacing" by the Ad Standards community panel.

The panel ruled last month the advertisement - showing the ancient alien/eldritch monster Pennywise with yellow eyes, stained and damaged teeth, an unsettling smile and blooding dripping from his mouth - was too menacing for the public.

"The level of menace exceeded the amount which most members of the community would consider to be appropriate," the panel ruled.

"The majority (of the panel) noted that the main character in this film is an evil clown that eats children. The majority noted that the character was introduced in the first film of the series, and that the film series is based on a well-known novel by Stephen King. The majority considered that many people are familiar with the concept of the IT films, even if they had not actually seen the original movie.

"The majority considered that the image selected to represent the main character from the horror movie had a strong implication that the clown had eaten someone, based on the depiction of blood dripping from its mouth."

But a similar billboard, which featured only the character's yellow eyes, was deemed "far less menacing or threatening".

Complaints about eight trailers for the same film that were screened on Network 10 during prime time were dismissed last month, with the board saying the movie trailers were "suspenseful, rather than violent".

The advertiser said the works did not "depict violence but does contain scary/ supernatural themes which is relevant to the movie" and was "accordingly unavoidable".

"The creative was approved by the outdoor companies prior to printing and caution was taken in order to avoid placements within 300m of schools," the advertiser said, as published in the case report available here.

Parents wrote to the Ad Standards Board complaining the promotional material was confronting, distressing and scary. Many reported the posters being placed near their children's schools or busy motorways.

"Given I can't exercise parental controls on what my children see out of the window of the car, the image chosen to advertise this movie needs to be appropriate to all audiences, not just those above 15," one parent wrote.

"My two daughters are five and seven and find this image scary and distressing."

The report said the billboards have since been pulled as the movie's marketing campaign ended. 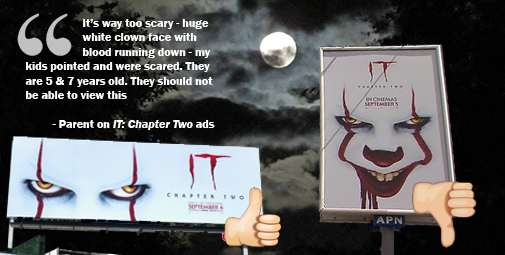 The poster on the left, which the Ad Standards board said was "less threatening" and the other which was deemed too harrowing for children.