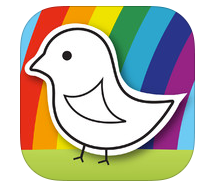 This game provides a range of colouring in sheets for children to "colour by number".

This review of 123 Color HD:Talking Coloring Book (Words Spoken in English, Spanish, French and German) was completed by the Australian Council on Children and the Media (ACCM) on 5 April 2014.

This App is a “colour by number” book re-imaged for an iPad (with options to colour by number, letter or colour). Children choose a colouring-in sheet from a range of pages then match the correct number to the colour to touch and colour-in each page. The app allows the user to select a range of languages including English, Spanish, French and German.

As a digital colour by number (or letter or colour) app, with pre-set sheets of images to colour-in, this app restricts the opportunities for creativity. It does however, offer opportunities to practise simple words such as numbers, colours and letters in different languages (English, Spanish, French and German in the version the reviewer tested). When children complete an image there is a short song and simple animation played as a reward. There is also the option to hear both the English word and the word in another language, which could be useful to children learning other languages. In user testing most children played this for a short time only.

Links to new colouring sheets and other apps by this developer were present in one version played.

There are some stereotyped images.

No game behaviour which may be of concern to parents found during the review.