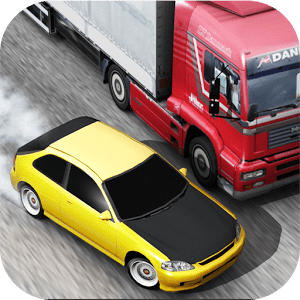 This review of Traffic Racer was completed by the Australian Council on Children and the Media (ACCM) on 14 February 2014.

This review of Traffic Racer contains the following information:

This is a car racing game. The player must drive along the road, avoid crashing into other cars, earn points and “cash” for driving quickly and overtaking other cars.

Within this game, the player has a choice of four driving scenarios – Endless One-Way, Endless Two-Way, Time Trial and Free Ride. The player steers by tilting the device and can accelerate and brake by touching the screen in the designated spot.

The developer provides tips which may encourage risky behaviour such as:

“- The faster you go the more scores you get
- When driving over 100 kmh, overtake cars closely to get bonus scores and cash
- Driving in opposite direction in two-way mode gives extra score and cash”.

The player initially has a limited choice of cars, options and driving scenarios. More can be unlocked with “cash” earned. Upgrades can be bought with “cash” earned. Extra “cash” can also be earned by liking the app on Facebook, following it on Twitter or watching a video (which is an ad for another app).

In two-way scenarios, driving is on the right hand side of the road, as in North America.

One 15 year old testing the App suggested that this game was enjoyable but might concern some parents - for example “You just pop into the oncoming traffic lane quickly for more points.”. He suggested that the game was partly enjoyable as you could do things you couldn’t normally do in real life, such as crashing on the freeway while travelling over 100km/h. "Kids like games that you couldn’t do in real life” he said.

None found. "Cash" is referred to, but this is the points earned in the game.

Players can elect to Follow the app on Twitter and/or Like it on Facebook to earn game cash. There is an option to sign in with Google+  to activate leaderboards and achievements. If players sign in to Google+ the app can do the following: gather their basic profile info (the player has the option to select which friend information the app collects – the default is all circles of people); make their game activity visible to others (this can be defined by the player, but the default setting is Public); share Google+ profile information and manage game activities and view and manage their data for this application.

To gain “free” points, the player can watch a video, which is essentially an ad for another app. Ads presented included an ad for an app which involves hunting and shooting animals and one for a simulated casino app. Tiny ads for other apps and other services sometimes pop up on the screen.

Violence and scary material:
Players can deliberately crash into other cars and trucks.