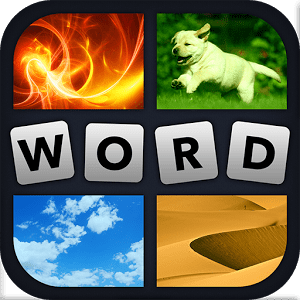 In this game, the player must use four picture clues to work out a word.

This review of 4 Pics 1 Word was completed by the Australian Council on Children and the Media (ACCM) on 2 February 2014.

This review of 4 Pics 1 Word contains the following information:

In this game, the player must use four picture clues to work out a word.

In this app game, the player is presented with four work pictures and must determine the word which describes what they have in common. Clues are given such as how many letters are in the word and a selection of letters is shown, which include the letters of the sought word. Virtual coins are awarded for correct answers. They can later be used to purchase extra clues. The solutions gradually increase in difficulty.  A possible learning benefit could be that the player must look for the common thread in the pictures. Sometimes this requires imagination or lateral thinking and access to vocabulary. Given the broad range of vocabulary, ACCM suggests this content is appropriate for players 10 years and older.

An ad to upgrade to the Premium version of the app for US$1.99 was regularly offered – this would include 500 coins and no ads. These ads pop up quite frequently, so the offer to buy the premium “no ad” version becomes very tempting! Players can also purchase additional coins if required.

Players can connect to Facebook. When a player logs in to Facebook, the app receives the player’s public profile and friend list. An ad for an app which claims to allow players to “Meet local singles” and to “View photos for free” popped up - this app also allows the user to chat with others.

Very occasionally, there may be a gambling related picture, such as cards or a roulette wheel. An ad for slot machine apps and other simulated gambling apps pop up periodically.

There is a lot of advertising of other apps in this free version of the app. Ads for other apps (e.g. Candy Crush) often pop up during play. Several ads were for simulated gambling “slot” machine apps.

Some images may contain stereotypes.

Some images may contain sexual references.

Some images may suggest or contain coarse language.

Game consists of guessing words from images and letter clues. Some images may contain behaviour which could be of concern.

One of the words to be guessed was “wine”.  The word “party” showed an image of champagne glasses.