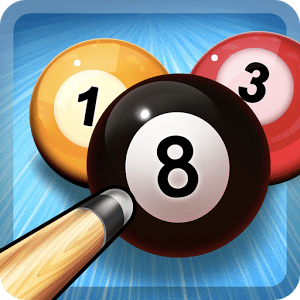 This is an interactive app based around the game of pool. Caution: in- app purchases, online interactivity, advertising, simulated gambling

This review of 8 Ball Pool was completed by the Australian Council on Children and the Media (ACCM) on 21 May 2015.

This review of 8 Ball Pool contains the following information:

This is an interactive online game based around pool. The objective of the app is to play games of pool against opponents, win prize money and unlock achievements and additional pool cues. There are limited skills needed, but motor skills and visual/aiming skills are necessary.

When the app is opened, players are brought to an introductory screen which offers them the options of logging in via Google+, Facebook, Miniclip ID or by playing as a guest. After this, players are taken to a main page which contains the following options: ‘Play 1 on 1’, ‘Play Tournament’, ‘Play Minigames’, ‘Play with Friends’, and ‘Practice Offline’. This main page also contains an icon that states ‘Login to Facebook and get 5 notes’. The game additionally contains an icon that states ‘Free coins’ – when players click on this, it offers them the choice to receive coins in exchange for watching video advertisements. Players are told that they may ‘Watch a short video and earn 15 coins. You can watch as many videos as are available to earn more coins’. These advertisements are full-screen and cannot be skipped once they have begun – they include games such as Racing Rivals, etc.

The app also contains an in-app store where players may purchase additional in-game currency for real-life money. Gold coins can be bought in packages of 12,500 for $2.49, 32,500 for $6.49, 70,000 for $10.25, 160,000 for $24.99, 500,000 for $64.99, or 1.25M for $129.99. Players can also purchases piles of green notes for similar prices. Within the store, the app also contains ‘Mini Games’ such as Daily Spin and ‘Scratch and Win’ – these are gambling-style games which cost money to play, and therefore require players to make in-app purchases. Similarly, players can buy ‘Chat Packs’ with in-game money (thus again encouraging them to make in-app purchases with real-life money) – these involve phrases such as ‘You can do it’, ‘Best shot ever!’, ‘I’ll be back in a minute’, ‘I am usually better!’, ‘Hahahaha!’, ‘Yes/No’, censored swearing, and other conversation-based phrases that can be used when playing against opponents. Furthermore, players can spend in-game money on purchasing upgraded pool cues – there are standard, premium, country and owned pool cues to choose from. Some of these are level-locked, and they have different statistics in regards to their force, aim, spin and time.

Within the ‘1 on 1’ play, players are offered a tutorial in playing pool. They are told to drag their finger up and down the device screen in order to move the pool cue (which is presented from a bird's eye view). They must then aim at the yellow ball presented on the table – players are also able to move the pool cue from the back or front. They may then drag and release the power bar on the left-hand side in order to make a shot. When players then begin a proper game, they are matched with another player whose username and profile image they can view. They then take turns to shoot balls with the pool cue provided, attempting to aim and ensure that the white ball hits other coloured balls off the table. Players can view their opponent lining up their shot as they wait for their turn. The game continues until one player quits, or all the balls on the table are gone. When a player wins, they are given a pop-up congratulations screen with a rating of stars they have won, as well as information on pool cues they may have unlocked. Players are also encouraged to ‘Share your victory!’ online via Facebook or Twitter.

Players also have the option of engaging in Tournaments which can have up to 8 players – this offers individuals the chance to win special prizes and obtain exclusive pool cues. The entry fee differs for different tournaments. Players verse an opponent, and if they win, progress to the next round.

The Spin and Win game presents as a slot machine – however, when players attempt to pull the lever, they are informed that 5 Spins will cost them $2.49 real-life currency. This is the same case for the Scratch and Win game, which costs $2.49 to play.

The app is based around the game of pool, where players must enter coins to play and can win coins in return. There are also casino-based games such as Scratch and Win, and Spin and Win (slot machine) – these require an in-app purchase in order to play.

Players are told that they may ‘Watch a short video and earn 15 coins. You can watch as many videos as are available to earn more coins’. These advertisements are full-screen and cannot be skipped once they have begun – they include games such as Racing Rivals, other casino-based games, etc. The in-app purchase packages are also advertised by pop-up screens that appear frequently during gameplay, and must be manually closed.