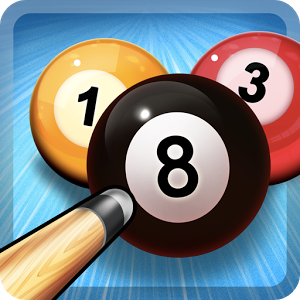 8 Ball Pool is a traditional game of pool played in real time. Players will benefit from having good spatial perception and fine motor skills. Caution: Strong gambling themes and elements, and social media connectivity. Not recommended for children 15 and under. Parental guidance suggested for 16 – 17.

This review of 8 Ball Pool was completed by the Australian Council on Children and the Media (ACCM) on 4 February 2019.

This review of 8 Ball Pool contains the following information:

Our Reviewer played to level 45

8 Ball Pool shows a birds-eye view of a traditional pool table. You play against other users by swivelling the pool cue into position (by swiping), lining up your intended shot, pulling the shot meter back (the further, the harder the hit), and then releasing to shoot the ball. In a standard game, the first player to pot or sink all their balls, followed by the 8 ball, wins. There’s a range of games that can be played, such as:  1 on 1, Abu Dhabi Championship, Tournaments, 9 Ball, Mini Games and Practice offline. Every entry into a game requires payment of virtual currency, which also goes to the pool if you win (e.g., Entry fee $100, Prize $200). However, losing a game also means losing your entry fee money. Players can also join Clubs, which allow free real-time communication between club members.

Parents should be aware that there are many gambling elements in this app. The main game requires that you pay to play and if you don’t win, you lose your money. The game does start you off with virtual currency (more if you connect through Facebook), however after a few short losses that currency has gone, and you can no longer play unless you watch ads or buy more virtual currency with real money. In addition, there are also side games which are blatant simulated gambling elements. These include: Spin Wheel, which gives you three free spins to begin with, but offers more spins at a cost of real money;  Scratch and Win, which costs $2.99 to play; Boxes, which provides a free loot box at first, but then requires real money for more;  and “Hi-Lo”, a roulette style game requiring you to guess whether the next ball spin will land on either a higher or lower ball than the one before (our Reviewer needed to spend $2.99 of real money to play and the first ball to guess high or low from was an “8”, from 15 balls this essentially means it is a guess with a 50/50 chance). The game also allows players to join ‘clubs’ and to communicate with other members of their club in real time, via text. Noting how many gambling elements are present in this game (in game play, look, audio and feel), ACCM strongly recommend children 15 and under are restricted from playing this game and adolescents aged 16 -17 proceed with caution, at their parent’s discretion and under supervision.

There is a lot of In-App purchasing throughout this game and both the Spin and Win game, and Scratch and Win game, require a payment of $2.49 before players can use them. There is an In-App store where players may purchase additional in-game currency for real-life money, for example:

There is a lot of online connectivity in this game, including:

There is a lot of advertising in this game, including: