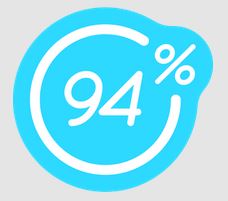 This review of 94% was completed by the Australian Council on Children and the Media (ACCM) on 30 April 2015.

This review of 94% contains the following information:

This app was reviewed up to level 15

94% is a quiz-based app that tests general knowledge. The objective of the game is to work through different levels by thinking up or identifying words/objects that meet certain specified criteria, or that are evident within a visual image. Skills needed to play are mostly based around general knowledge and a wide understanding of various topics.

When the app is opened, the screen is divided into two – the top portion displays the apps logo (‘94%’), whist the bottom displays a range of levels. Level 1 is the only level that is available to players, whilst the others (which go up to level 70) are level locked. After clicking on level 1, players are taken to a screen which offers three options – the boxes respectively state ‘Things you find in a pencil case’, ‘Fruit with seeds or pits’, whilst the third box shows a portion of an image. Once a player chooses one of the three options, they are instructed to ‘Find 94% of the answers given by players’. Players then must type words into a small text box – for instance, typing ‘pen’ or ‘pencil’ into the text box in regards to items found within a pencil case. If other players have typed in those things, the word is depicted and points are awarded to players. If the word entered by players was not already inputted by others, no points are offered.

Players must reach a score of 94% of the items in order to pass the level. Players additionally have the option of using a helpful hint, where the app asks them ‘Do you want to use the letter joker’. In using this feature, the app presents the number of characters for one of the words, as well as the letter that it begins with. Players also have the option of ‘Asking friends for help’ via social media websites such as Twitter and Facebook, or contacting them via text message or email. Once a player reaches a score of 94% by identifying all of the items/words, they are taken to a ‘Well done!’ screen that encourages them to share and compare their score with their friends via Facebook. Players also receive points towards their total score at the end of each level.

There are also image-based levels, where players are given a photograph or graphic, and it is necessary for them to identify and label several items within the image. For instance, in the picture of a burning house and fire truck, players must identify ‘Fire, water, hose, fireman, truck’ in order to pass the level and progress.

At the end of levels, full-screen static image advertisements are displayed which must be manually closed before continuing. These advertise other Google Play gaming apps, such as Thumbzilla (graphic violence), Caesar’s Slots: Daily Bonus (gambling content) etc. The ads also contain advertisements from Google, including things such as women’s fashion and accessories, etc.