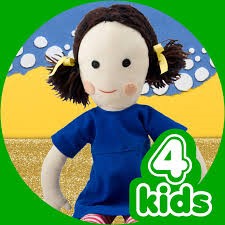 This review of ABC Artmaker was completed by the Australian Council on Children and the Media (ACCM) on 30 June 2014.

This review of ABC Artmaker contains the following information:

An App designed for young children – this game draws on characters from the ABC television series Playschool. Within the App, children can move, resize and play with playschool characters, creating pictures with them. Children can also add background items such as trees, cars and rockets to scenes by completing simple puzzles. After creating pictures, children can video record these, moving characters and items around the screen, capturing this in animated videos (recording sound and movement). Artwork can be stored and revisited or exported. Artwork can also be sequenced to create a simple book. This App is highly engaging with simple rewards (such as piano sounds) recorded by the Playschool actors. In user testing, parents and children were particularly impressed with the Australian accents and the ability to have open-ended play.

Note: there is also the option to view ABC playschool videos (although in user testing most children moved straight to playing the game).

No game playing behaviour which may be of concern for parents was found during the review.