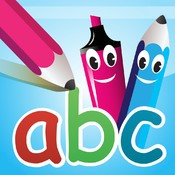 This review of abc PocketPhonics: letter sounds & writing + first words was completed by the Australian Council on Children and the Media (ACCM) on 28 March 2014.

This App is designed to engage children in letter sound correspondence, or phonics. It teaches single letter sounds and letter formation and allows the child to combine or blend sounds to form simple words.

This App is one of the few phonics apps that have some research supporting its use. It focuses on simple letter sound correspondence and on letter formation. It also demonstrates sounds and letter formation before having the child trace or write the letter. Although sounds are spoken with an American accent, pronunciation is clear and generally appropriate. Simple animations mean that the focus is largely on the learning rather than on distracting elements.

In observation with children, it was a useful tool for beginning writers but did not engage the learner for long periods of time. It is noteworthy that several schools have begun using this tool to replace text books for beginning phonics and that a school option (with data analysis for each user) is available.

If using this app or any others like this, the reviewer would encourage parents to use a stylus so that your child is also practicing fine motor skills and is holding the stylus with an appropriate pencil grip.

No game playing behaviour which may be of concern to parents was found.