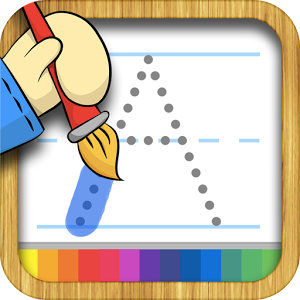 An interactive app for toddlers and young children involving activities that allow players to test their memory and rehearse numbers, in addition to being visually creative.

This review of ABC Preschool Playground Free was completed by the Australian Council on Children and the Media (ACCM) on 31 July 2014.

There are no levels within the app, but each of the three activities was played through to completion.

This is an interactive touch-based app for young children that allows them to work through three different activities which explore various skill-sets. Players are encouraged to be creative and colour in pre-set images, as well as draw freestyle on a blank canvas. Additionally, they are able to practice the hand motion of drawing individual letters of the alphabet by tracing over dotted lines. There are also memory-based activities where children may recall pairs of images within a grid of randomised pictures (these are displayed briefly at the beginning, and then flipped over). There is no objective in this app, other than to work through all of the examples within each of the three activities. This game encourages the practicing of fine motor skills (for example, tapping the screen, as well as tracing over individual letters), precision, appropriate use of colours, as well visual interpretation and labelling.

The app opens to a grassy scene containing three different sized white boards, each with different pictures presented on them – a paintbrush and palette, several letters, and numerous shapes. Players may click on any of the three options to begin.

When clicking on the paintbrush option, players are provided with a blank white screen that acts as a canvas – there is a range of colourful crayons down the left-hand side of the screen. It is possible to click on any of these colours and draw in a manual freestyle manner across the canvas. Players are able to refresh the page by tapping a Refresh button, thus clearing anything they may have drawn and beginning again.

Upon clicking on the whiteboard with Letters on it, children are given a range of activities to work through. The activities are arranged by letters of the alphabet, and each letter is previewed with the lower case and upper case version of itself, in addition to an image of an object beginning with that letter (e.g. ‘Aa’, with a picture of an apple). After making a selection from the list, players are brought to a screen focused on the individual letter they chose. They are provided with dotted outlines of several of the upper and lower case letters to trace over with their finger in order to practice the shape. There are also two images (such as an airplane and an apple) that players may click on, and proceed to colour in manually using the selection of different coloured crayons provided. Players merely use their finger to glide over areas of the screen in order to fill in colour.

When clicking on the whiteboard that contains a variety of different pictures and shapes, players are taken to a 4x4 board of squares of small graphics of various animals – there are pairs of the same images that are randomly placed in different positions across the board. After a few seconds, the pictures disappear and flip over, and players must tap each box to turn it over and match the images with their associated pair. Players are able to do this multiple times, with the same number of squares and same pictures arranged in a different pattern/order.

This app has many potential educational benefits for young children, helping to reinforce the learning of letters of the alphabet through repetition and offering players a chance to practice tracing by hand. It also offers opportunities for creativity, as well as the testing of a player’s memory, thus making this app quite well-rounded and balanced in its approach. With this said, it may be difficult to find an age group that will enjoy, and be capable of completing, each of the three activities – older children may enjoy the memory games but find the tracing and drawing to be unchallenging, while younger children may not have the capacity to complete the memory-based activities within the app.

There is a banner advertisement that is stable and remains across the bottom length of the screen regardless of the page that players are on. These include ads for children’s games as well as more adult games such as ‘Game of War’.

No game playing behaviour which may be of concern to parents was found.