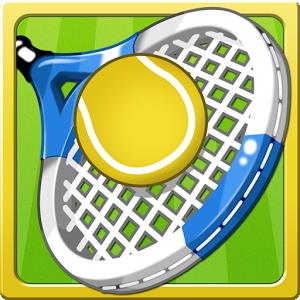 This review of Ace of Tennis was completed by the Australian Council on Children and the Media (ACCM) on 24 June 2014.

This review of Ace of Tennis contains the following information:

This review focuses on levels 1-8.

Ace of Tennis is a three-dimensional tennis game app that allows users to play through three different modes: World Tour, Championship and online Multiplayer where they may verse random players or invite their friends to challenge them. The objective of the game is to win as many matches as possible, and progress in rank, experience level, amount of gold coins and gold bars, etc. The skills required to play include spatial/visual, hand-eye coordination, and reaction times.

After players open the app, they are brought to a front page that contains both a banner advertisement for an external app to download, as well as an option to sign in via Google+. Players may also utilize the ‘Guest Log In’. If players log in as a guest, they may only play through a very small portion of the game. Once the game begins in this mode, players are told they have the first serve. The scene takes place at an animated tennis court, while a human and small creature prepare to have the first throw. Players must tap the screen to serve the ball and hit it across the net towards the opposing team – there is a meter below the ball which scrolls between green, yellow and red, and players must tap when this meter is in the red ‘maximum’ zone (this ensures a more powerful strike). After doing this, players will receive a screen message stating “Bad!” if they strike in a way that doesn’t earn them a goal, or ‘Nice!’ if they strike well. Players may elect to use the auto-throw option, where they simply tap on a picture of a fast ball on the righthand side of the screen – this ensures a good serve each time.  The opposing team will hit the ball back, and players must tap at the correct point in time in order to hit it once more. The ball bounces back and forth several times until the computer-generated opponent, or the player, misses the ball.

Players are also accompanied by a partner during various games who may hit the ball and score points/goals also. However, players may also ‘fault’ if they use the auto-throw option. As the players continue, they receive 15 points if they score a goal, and opponents are given 15 points if they alternatively score. Players will receive a statement saying ‘Loser’ if they lose a match, or ‘Winner’ if they win.

Full-screen pop-up advertisements for other apps will appear after a match is finished. These must be manually closed by using the small X in the top left-hand corner of the screen. At some points within the app, there is also a small banner advertisement along the bottom of the screen. These advertise external apps of varying subject matters – e.g. fantasy/RPGs, gambling simulators, etc.

When players sign into the app via Google+, they are greeted by another character who introduces themselves as Coco. He tells players how to play Ace of Tennis, and informs them that there will be surprises throughout the tutorial process, and to not leave until the end. Ace of Tennis has three game modes: World Tour and Tournament Matches, Championship for winning streak, and Multiplauer to compete against other users.

Within World Tour, players first need to serve after their power gauge rises into the red zone. When the gauge is full, players are instructed to touch the screen to serve the ball. Players receive two attempts at serving, but lose the round if they fail to get the ball over the net both times. When players hit the ball and receive it back from opponents, they must touch the screen when the two circles overlap with each other – closer circles will enable a more powerful attack. Players may check their points during a match by touching the top of the screen. It is also necessary for players to monitor their HP gauge – when they are running low on HP, their playing speed becomes slower and it is harder to return the ball. Players must therefore attempt to win before their HP gauge runs out completely. When a player wins a match, they receive rewards – players may pick from three boxes and select their own hidden reward (e.g. a Santa Costume). Players are also told that if they invest a little, they have a chance to pick one more box. Although players are given the option to try it for free the first time, they must then pay to purchase more coins after this. After receiving rewards, players may put them on their characters in order to make them stronger and afford them higher levels of HP. They may also opt to sell these items for in-game coins. It is additionally possible to upgrade items using in-game coins. In order to complete a fusion, players must level their card up to 30 and must upgrade it 5 times. Once a fusion is completed, the level of the card goes up and it becomes much stronger.

In order to play Doubles in the World Tour, players may ‘draw a pet’ – this costs varying amounts of gold coins. Players may then participate in matches with their pet after equipping it. Having a pet also affords players a ‘Skills icon’ which appears on the right-hand side of the screen during matches. Players are able to touch the skill button, as opposed to anywhere on the screen when hitting the ball, and this will offer a more powerful hit. Different pets have different skills, and players will want to use particular pets to match each game. Skills take time to regenerate, however, and may only be used every several minutes.

Within the Championships section of the app, players will receive more points for greater numbers of consecutive wins. However, players do not receive experience points within this area.

In the Multiplayer component, players may compete against other users online. Players may play against someone they don’t know with Random Matches. Rankings in this area will be decided by points. It is also possible to challenge friends with invitations – friends may accept invitations sent out via the app. However, results from friend matches do not affect a player’s ratings. Players also do not use Thunder or Fist within Friend Matches. The game also includes Daily Missions within each of the three categories – these are things such as Daily World Tour (challenge World Tour Five Times), Daily Championship (challenge Championship Five Times), etc.

In regards to the central menu options, players may look at their Gold Bar and Coins (in-game currency used for drawings, upgrades and fusion, and may be obtained from playing the matches), Thunder (used when playing in World Tour mode), and Fist (used when playing in Championship mode).  Players may also access the Shop where they can use vouchers, and a Rewards tab where they will get better rewards depending on how well they play (and how many missions they complete).

It is also possible for players to make more specific in-app purchases from the Store. Here, they may pay for things such as Basic drawings (costing $1.99), Premium Package Drawings ($34.99), Premium Full Set Drawings ($54.99).

The app does not appear to pose any risk to players, but rather, it encourages players to utilise hand-eye coordination and reaction time skills in order to complete the challenging matches. However, the potentially expensive in-app purchasing may still prove problematic to younger users, and may warrant parental supervision or discussion surrounding this particular feature.

It is also possible for players to make more specific in-app purchases from the Store. Here, they may pay for things such as Basic drawings (costing $1.99), Premium Package Drawings ($34.99), Premium Full Set Drawings ($54.99).

Players must sign in via Google+ in order to access the full game. It is also possible to players to enter a Multiplayer arena within the app, wherein they may invite friends they know to challenge them to matches, or may play against unknown individuals from the global community.

No gambling was found during the review.

Full-screen pop-up advertisements for other apps will appear after a match is finished. These must be manually closed by using the small X in the top left-hand corner of the screen. At some points within the app, there is also a small banner advertisement along the bottom of the screen. These advertise external apps of varying subject matters – e.g. fantasy/RPGs, gambling simulators, etc.

No game playing behaviours which may concern parents were found during the review, rather it encourages players to utilise hand-eye coordination and reaction time skills in order to complete the challenging matches.