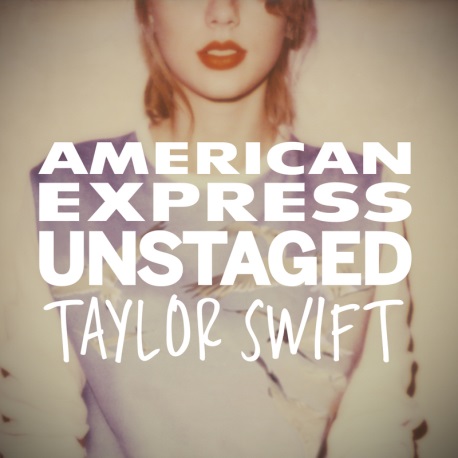 This review of American Express Unstaged Taylor Swift was completed by the Australian Council on Children and the Media (ACCM) on 16 December 2014.

No levels within this app.

This app gives Taylor Swift fans a look from behind the scenes during the filming of her music video ‘Blank Space’. The player can follow the characters around the set and search for hidden objects.

There are six sections on the main menu of the app. The first part of the app lets the player watch Taylor Swift’s music video  ‘Blank Space’ which is a song from her album ‘1989’. The music video is about Taylor Swift falling in love with a man and then getting angry when she finds out that he is talking to another girl (see Sexual References and Violence and Scary Material for more details about the content of the music video).

The second and main section of the app is the ‘Experience’. The Blank Space music video was shot with 360° cameras, making it possible for the player to be part of the music video while it is taking place. The player can explore the mansion where it was filmed, follow Taylor and the man around the house and also search for hidden objects in the scene. To navigate around the house, the player can either tilt their device or swipe around the screen. The player can click on certain objects to interact with them, for example, open doors or zoom in on pictures.

The third and fourth sections of the app (Tour Details and Buy the Album) take the player to the Taylor Swift website (see Online Information for more detail). The fifth section called ‘Behind the Scenes Exclusives’ is a playlist of five YouTube videos, which are each about 1-2 minutes long. These videos are interviews with Taylor Swift about her inspiration and the making of the video, and some behind the scenes footage of its filming.

The final section of the app is ‘Discover More Unstaged Moments’ which is an archive of other YouTube videos from American Express (see Online Information for more detail).

There are no logins or sign ups involved with this app. However, in the ‘More Unstaged Moments’ section the player can like or follow Amex and Taylor Swift on Facebook, Twitter and Youtube. From the main menu, the player can click either ‘Buy the Album’ or ‘Tour Details’ to be sent to Taylor Swift’s website. On this website, the player can learn about where she is touring, read articles about Taylor, and buy her new album and other Taylor Swift merchandise.

The music video shows Taylor and a man falling in and then out of love. The video includes some sexual references. For example, Taylor is shown wearing revealing lingerie, flirting and kissing the man and also straddling him while he is lying on the ground.

The emphasis of the app is to explore the behind the scenes of the music video, therefore, the game play itself is not concerning. The themes, however, of the music video may promote the idea that solving relationship problems with violence is acceptable.

Violence and Scary Material: In the music video, Taylor starts out nice and sweet and is then shown as violent and crazy. Taylor is shown smashing an expensive car with a golf club, shoving the man and throwing a vase at his head. She also stabs a cake and some paintings with knives. This change to an ‘evil’ Taylor may be scary for younger children.