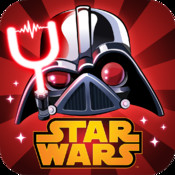 This is a multi-level physics based game with a Star Wars theme, in which the player launches birds with the aim of destroying the pigs.

This review of Angry Birds Star Wars II was completed by the Australian Council on Children and the Media (ACCM) on 11 March 2014.

This is a multi-level physics based game with a Star Wars theme in which the player launches birds with the aim of destroying the pigs. That is, unless they join the Pork Side.

In this game, the birds and pigs become Star Wars characters. The evil pigs are on the Pork Side. The different types of birds have different powers, which include light sabres and the Force. The pigs are located in defensive structures, made of various materials like wood, stone and ice. The player must launch each bird at the pigs’ defences in an attempt to destroy their defences and, in doing so, the pigs. Each level has a fixed number of birds which can be used. The birds in the sling shot may be able to be swapped with other characters, as they are earned or purchased with credits.  Each level has a different defensive structure using a range of materials.   The player must use trial and error and logic to work out the best angle and force to use to destroy it. Successfully destroying all the pigs moves the player to the next level. Points are earned for shots, pigs destroyed and unused birds, leading to a score for each level. Credits may be awarded.  The game is set up with different scenes based on the first Star Wars trilogy, each with multiple levels. The levels become progressively more challenging. If the level is failed, the player can try again. When the player reaches a certain level, they are offered the choice to play on the Pork Side i.e. the player is on the side of the pigs and is trying to destroy the birds. Credits can be used to buy additional characters, bought separately or in bundles. Credits can be won and characters earned by completing achievements.

Extra credits can be purchased (for $1.99 to $109.99). Special deals and packages may be offered. Both the iTunes and Google Play stores advise that “The bill payer should always be consulted beforehand.”Purchasing can be by debit card, credit card and gift card (i.e. Google Play card).   The process to purchase items requires moving through 3 screens before entering either card/debit card details or gift card number. Where GooglePlay credit already exists, the Google Account password is requested. Parents should be aware that if they enter the password, the player can make more than one purchase. The password remains valid for 30 minutes to continue purchasing, even after the game has been exited and resumed.

Players can register with the developer to save scores to be able to continue play on another device – this requires the player’s email address, a password and date of birth.

None found during review.

Ads are presented periodically. These are generally for other games by the same developer.  Sometimes ads are for other products. Players can watch promotional videos for children’s movies and television shows.

Players can go to Toons TV where they can watch cartoons. Some are trailers for children’s movies and television shows.

The game is promoted as dishing out revenge on the greedy pigs.  Players may choose to change to the “Pork Side” (like the Dark Side).

Violence and scary material: This game contains mild cartoon violence – the player is launching birds with the aim of destroying the pigs. They may use light sabres. When the pigs are destroyed, they simply disappear in a puff, as do the birds after they have been used.