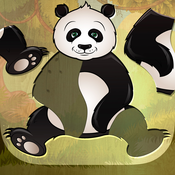 This review of Animals puzzle game for preschool kids- learn words and sounds was completed by the Australian Council on Children and the Media (ACCM) on 6 June 2016.

This game was play for a minimum of 30 minutes.

The aim of this game is for the player to put multiple animal puzzles back together correctly.

When opening the app, the player is presented with two choices of scenery to choose from. The two setting options are “Grassland” and “Jungle”. Inside each of the settings are animals shown to the player. The player is then able to click on an animal, which takes the player to a screen where the animal is shown as a whole, and then divided into multiple pieces. It is up to the player to put the animal puzzle back together. To make the game easier for the player, the app includes sound effects to prompt whether the player is correct or incorrect with the placing of the puzzle pieces. For example, if a piece of the puzzle is placed in the wrong spot the app with make a noise and the piece will quickly move back to its initial position. If the puzzle piece is put in the correct position a different noise will be played, the piece will stay put and butterflies/leaves will appear on screen. Once the player has completed the puzzle, the player’s success is congratulated, and the name of the animal will be spoken and shown on screen.

At this time of the game, the player is presented with multiple buttons on screen. The first is a camera, which when pressed shows images and facts of the animal on screen to the player. The player is able to click through pages of information and real life photographs of the animal they just put together.

The third button is for the player to select the next animal puzzle to put together. This continues until the player does not wish to play anymore.

Throughout this game it was made obvious that some of the pronunciation of certain animals was different to the way Austalians would say them (e.g. zebra and grasshopper). Also, some animals used different names than those used in australia (eg. Beetle rather than ladybug).

The choice of animals seemed interesting as there were numerous Australian animals, eg. kangaroo and koala. Yet, many animals within the app were ones that children in Australia may have never heard of or seen before. For example, it is very uncommon for children in Australia to witness or hear of a yak, racoon, vulture, buffalo, stork, skunk or squirrel in everyday living. Although it is not uncommon for them to learn about these animals later in life, they may be unfamiliar for children who are under the age of 10.

There is an ad placed at the top of the screen for the player to read. The ad continuously changes throughout the game to promote other apps that the player can download eg. Cookie Jam, Cheap Flights Search, Panda Pop, Jewel Mash.